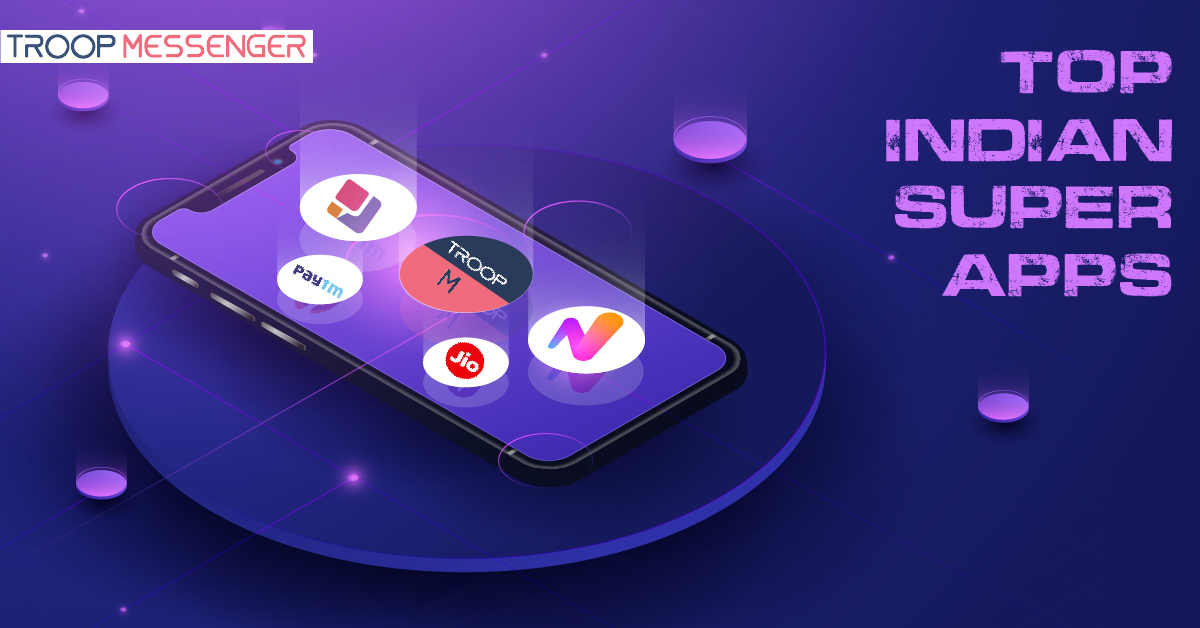 Are you exhausted from switching between applications to fulfill different needs, such as buying clothes on Myntra, ordering meals on Zomato, or booking a ride on Ola? Then, you must look into super apps, especially Indian Super apps, which are an aggregation of apps that allow you to manage your everyday tasks from a single app without any exasperation.

When you hear the term "super apps," you might take it to mean it has superpowers like superman. There are types of super apps such as business super apps that streamline the daily business or office activities, and other apps streamline your everyday activities and reduce stress superbly by consolidating all of your daily activities into a single UI rather than dispersing them across several screens. To reiterate, Super Apps is the current vogue or sensation; in other words, it has become a hot cake, with most organizations preparing to launch it while just a few have already done so.

When some parts of the world are busy counting their accomplishments, others are aiming for greater goals, believing that the transition from the stone era to the digital age is only the beginning. And we can't afford to be too preoccupied with the before the upgrade. As the basic definition of upgrade is to advance from the preceding.

Introducing a new exuberant software or app based on customer needs will not bring you to your desired users; your success will be determined by how much your app can reduce your customers' efforts in meeting their needs. And these apps are critical tools for sorting out all of a user's needs while also making their activities easy.

What are Super Apps?

Super Apps developed as web applications or mobile applications aimed to organize the user's daily activities by providing multiple services in one app, such as booking a cab, making a payment, purchasing medicines, etc. If you are still confused what are super apps? In simple words, since we live in a digital age, these apps enable users to meet all of their needs with a single app, with other apps like UPI payments, Myntra, Zomato, Ola, and others integrated within it. For example, rather than driving to various stores, you could go to a shopping mall and locate everything you require. Likewise, the same principle applies to this app.

Since their inception, Indian super apps have experienced constant growth. This concept originated in an Asian country and will soon spread over the globe.

Some of the most popular Indian super apps to recommend are listed below.

The Tata Group's salt-to-software conglomerate has developed Tata Neu as an all-in-one app. Tata Neu has sparked considerable euphoria among the public, and analysts predicted that it would likely become one of the most celebrated India’s super apps even before its release. As everyone has their expectations based on the brand name.

Tata Neu mega app has 2.2 million app downloads and 2.1 million app enrolments within a week of its introduction. The app presently offers hotel reservations, travel reservations, food orders, and quick loans, with plans to expand into micro-financing, micro-insurance, buy now & pay later, and other services in the future.

As per Mukesh Bansal, President, Tata Digital, over 10% of users from standalone Tata Neu companies such as BigBasket switched to Tata Neu at first, increasing to 30% during the pilot phase. Further, it is likely to increase to 50% of consumers shifting to Tata Neu.

Is it possible to classify the Tata Neu app as a full-fledged Indian super app? It's possible, but it's also possible that it's not, since no instant messaging apps or social networking applications aren't on the list with the brands. Due to the integration of social media applications, a few super applications in Korea have become successful, and subsequently, the these apps and social media apps have gained more users. I am hoping to see Tata Neu integrate a popular social messaging app, as they've become millennials' virtual communication extension.

Paytm is one of the finest Indian super apps that has been used widely for virtual payments. Paytm is abbreviated as Pay Through Mobile. It is a multinational financial technology business headquartered in Noida, India, which specializes in digital payment systems, financial services, and e-commerce. The company provides its registered customers with an app that becomes your digital wallet, conducting financial transactions, making payments to merchants & financial institutions such as insurance companies, ordering food, medicines, etc. At the Forbes Leadership Awards 2016, Paytm received the Outstanding Startup of the Year Award.

Clapping takes two hands, but this Indian Super app gives you more than two to organize your social life. If you think of Clap Messenger as just a messenger or Telegram and WhatsApp alternative, you're mistaken because it goes well beyond that. Few super applications in Korea and other nations couldn't retain users since each app was identical and they lacked a social messenger. However, this is one of the few Indian super apps that has considered the needs of its users by aggregating other apps in addition to an end-to-end encrypted messenger.

Along with messaging and calling, you can pay securely, split money, share albums, and events, as well as make polls, call recordings, and book appointments. Third-party merchants for food ordering, travel booking, card and loan repayment, utilities, shopping, and other services will be introduced in the second phase.

Reliance introduced My Jio, as an India's super app that combines the features of the local search engine Just Dial, which was acquired by the company. This app is a marketplace for services and products that are powered by a mix of in-house technology and third-party connectors.

My Jio has its services such as Jio Mart, Jio UPI, Jio Music, Jio Movies, games, and more, as well as, the ability to arrange doctor appointments, pay insurance, and conduct other financial activities. This Indian Super app might be a one-stop-shop for Jio subscribers, with non-Jio users having to switch to Jio and become a customer to fully utilize all of the services.