Download app
Black Friday Deal is Live for all the New Customers! Avail 50% off! Get the deal now!
blogs Onenote vs Evernote vs Notion: Is it Time to Make the Switch? 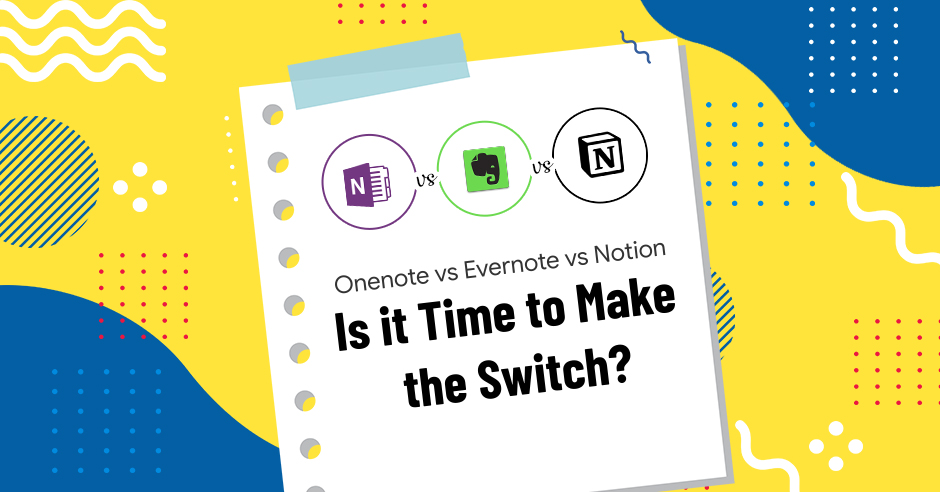 Onenote vs Evernote vs Notion: Is it Time to Make the Switch?

It’s no surprise why.

Microsoft OneNote is the best note-taking app that really popularized the concept, and Microsoft and Evernote are two of the biggest players around. If you’re thinking about signing up for note-taking apps, you might wonder who wins in a battle between OneNote vs Evernote vs Notion on features, pricing and more.

Notionclaims to bring the best of both the worlds by offering a new block-based layout which is usable as a note-taking app, Kanban tool, and to-do list.

At Tvisha, all our team members are now working remotely. Needless to say, the COVID-19 pandemic has changed the way we worked.

Now, our project management, team management, and customer relationship efforts all depend on the intuitive software that enables us to work from home.

Fortunately, we’ve our own Internal Team Communication— Troop Messenger — that has saved us from the hard part of managing remote collaboration. With Troop Messenger, we are literally doing everything we were doing from our workplaces. Our team collaboration and internal communications are as strong as it was before the nationwide lockdown.

The only area we were having a problem with was ‘Note-Taking and Idea Management.’ Some of our employees felt that they don’t have a centralised tool to easily and conveniently store a great many ideas and information they come across on a daily basis.

We also asked around with some friends to nudge them to share their advice. As a result, we shortlisted three note-taking apps:

Our internal team used each of these tools to find what worked for us. But we didn’t stop there, and eventually decided to share our experience here in the form of a comparison article.

Now, let’s take a look at each of the important features of the best note-taking app. Below, we are sharing an unbiased comparison of different factors you need to consider before making the final decision.

And before you get started on the features, let’s do a quick overview of each tool.
We’ll hopefully help you decide for yourself in this comparison of three of the best-known best note-taking apps available.

Known as a digital note-taking app, MS OneNote allows users to organize their thoughts, ideas, discoveries, and plans in a notebook form. It’s a multi-user collaboration tool that gives away a lot for free. It can do the 3R’s of Reading, Writing, and Arithmetic.

Microsoft OneNote is most often used by companies with 1000-5000 employees and >1000M dollars in revenue. In the Office Productivity category, Microsoft OneNote has a market share of about 0.2%.

Evernote lets you capture and prioritize ideas, projects and to-do lists, so you focus on what matters the most and get quick access to that information anytime, from anywhere — since it works pretty much everywhere.

Whilst Evernote remains the most used note-taking app, with a whopping 225M active users globally, and arguably, the world’s most well-known personal productivity software, it is losing many loyal users.

Notion is a collaborative note-taking app that lets you take notes — write, plan, organise, and collaborate. With 30+ types of content to add, you get the freedom to create notes within different templates.

As of now, Notion has a market value of at $2 billion — a huge sum for a company that only recently reached annualized revenue of $30 million.

OneNote’s Interface feels downright scrapbooks. It’s jaunty. The colour used to create a brand identity is the same shade of purple. The menu has large and colourful icons. Panels show your notebooks, pages, and a section that give the feel of a school binder. OneNote allows users to have more freedom than Evernote.

Users can have text boxes next to tables, audio clippings, images. You can combine all the different elements on the page to create the document. In simpler terms, OneNote is more than a word processing document.

Both Evernote and OneNote have a distinctive style. Based on it’s UI and UX, Evernote clearly looks more polished.

It looks and feels like a business productivity software. Moreover, the staid colour scheme of Evernote creates a non-nonsense feel.

Evernote has rich formatting tools that appear as minuscule icons along the top menu bar - much like a near row of stars in the sky.

Apart from this, Evernote can be customized according to a user’s preferences. You can change previews of notes according to your requirements. Simply put, when it comes to look and feel, Evernote has everything in place

Notion has a neat UI/UX where note-taking and other elements are easily accessible. It takes a different approach to note-making where instead of notebooks and sections, there are pages that are used to create blocks.

Notion users can access the pages from the sidebar. They can further drill down to different sections and hop between pages to notes without too many clicks to go back and forth. In short, pages within pages offer incredible flexibility. You can have a ridiculous amount of information within one note.

Microsoft OneNote, as one of the highly intuitive and versatile note-taking apps, allows the users to take notes via text, images, and audio. One of the most powerful features of OneNote is that it allows users to handwrite notes if they’re using a touch screen device.

You can also scan the physical documents and store them in the notes folder. These notes rest in sections that are further stored inside the notebooks.

Evernote, as a cloud-based note-taking app, allows users to create, organize, and store different media files. On Evernote, you can take notes in the form of images, audio, video, web pages, and text documents.

Apart from that, you can scan documents or physical papers and store them in the cloud notes. Since Evernote stores all your notes in the cloud, your notes are synced across all your devices.

Notion uses the block form for note-taking. Hence, if a user wants to create notes, they begin by creating a new block. In this block, they have the option to take notes in the form of a text, audio, gallery, video, wikis, table, Kanban-style, code, and more.

Through the sidebar, users can also drill down into the pages with no limits, which is different from note-taking in Evernote and OneNote.

Since Note-Taking Templates are such an integral part of note-taking apps, it’s important to consider a number of templates before making the purchase:

OneNote has a collection of 20+ pre-ready templates for users to use during meetings, project management, class, events, and more. You can download these templates from the OneNote Gem Website where you get access to the commonly used templates like Pre-Travel Checklist, Daily Work Schedule Template, Cornell Stone, Time Management Quadrants, and more.

As for Evernote, it offers an exclusive range of templates for users to choose from. Generally, the note-taking templates are categorized into the to-do list, meeting notes, writing, management resources, home and garden, party planning, travel, school, and more. Users also download, personalise, and manage these templates according to their use.