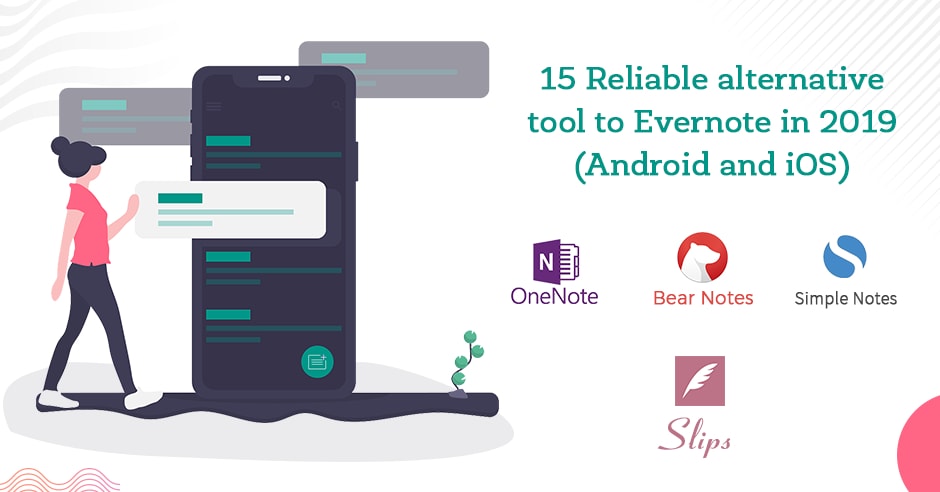 15+ Reliable alternative tools to Evernote in 2022

The Evernote open source has played a vital role in social media marketing. A social media manager has used the Evernote app to shape up the busy day in the most effective manner. It has been the most popular digital notebook to capture ideas through notes, visuals, and recordings, drafting articles and saving materials to read later

In this blog we list out the best Evernote alternatives you must try this year.

The paid version of the Evernote comes with a hefty price tag; hence, if you are looking for a reasonable alternative or a free alternative to Evernote, here are the top 14 tools which are worth a try.

Microsoft Onenote is an excellent free alternative to Evernote. The app comes with a pre-loaded Windows 10 operating system and a web application too. It is easily available in mobile apps for IOS, Windows phone, and Androids.

OneNote can synchronize the data from your Microsoft account and makes use of OneDrive to save all the data that you require. It has a capacity to store up to 5 GB data and can help you gather and organize the links, the images, high-quality texts and drawings in the notebook.

Importing tables and text email content, images and audio from other Microsoft Apps is also a great function Onenote has to offer. It enables recordings of audio and capturing of images too which Evernote does not offer. Evernote does not have an in-built audio capturing feature.

The latest Apple Note comes with a full management tool. The main features include the tool organizer which organizes the notes into folders. It can attach videos, audios, and images and share with contacts by simply drag and drop action.

Unlike Evernote, it has a cloud-based operating system. The notes are accessible from the icloud and synced across all Apple devices on any platform. The icloud notes which have been deleted around 30 days prior to work can also be recovered and edited on icloud.com.

A user of IOS9 device can also use the feature of a doodler, and benefit from the various tools like drawing tools (pencil, felt tip marker, eraser, and pen). One can easily use these features to capture their ideas, and represent them using these visual aids.

Bear is an Apple note device which syncs with the cloud services. It has an aesthetically appealing design, with great UX. The navigation feels natural, and it is easy to create notes, find them and organize the notes into folders.


Unlike Evernote, Bear allows fairly easy conversion of documents and notes into other formats like PDF, or Word document. It has beautiful themes which are in-built, and style and links can be customized with just a keystroke. It is a low-cost note-taking app suitable for Apple device owners.

Essentially, we often look for a piece of paper to make instant and quick notes. Slips is an application developed to take quick notes. The tasks which are entered in Slips are quite manageable with timely reminder alarms.

Since it looks like a colorful pinboard, Slips is a great app for creating short cheat sheets for learning. Thus, it competes not only with Evernote, but can also be an alternative to a powerful flashcards base by Subjecto which is loved by many students.

Though there are many apps alike in the market, Slips is powered with a bunch of features like Text Decorations, Managing Contacts, Importing Images, Emoji Icons, Reminder Alarm, and Social Sharing. Slips have its footprint in Android and its iOS version is about for release.

SimpleNote is a completely free note-taking application and comes with cloud-based storage. Evernote only provides a limited free version, whereas Simple note is free. It runs on multiple platforms which include Mac, Linux, web, Android, IOS, and Windows.

As the name itself implies, it is easy to use and runs fast on the system. It allows instant search tags feature or share a list option, unlike Evernote. You need to simply type in the requirement and the list updates instantly on SimpleNote. It lets you record innumerable textual notes and pin notes as per priority. It also streamlines the text note organization for its users.

Dropbox is a relatively new free alternative to Evernote. It promises to offer superior user experience and better API integration. The Dropbox creates a note and files it under the folders. It works in similar lines to a Google Doc system.

Dropbox covers the basic formatting options such as bold, highlighting features, lists in a less cluttered UI. The images too can be edited, along with the text. Dropbox supports the feature of LaTex and markdown which is very essential and popular among the technical writers.

Dropbox paper provides a collaborative document editor where you can embed anything and work on real-time without leaving the app.

Google Keep is regarded to be a huge Evernote Competitor. It is easily available for Android, IOS, and web app platforms. The Evernote provides almost similar features to users as the Google Keep, but the advanced features in Evernote are available at an additional price, whereas Google Keep is a great pick which comes free of cost.

The Google Keep users need to have a Google account to sync all devices which is a very useful option to the Android Users. The individual notes and other file attachments like images, audio, text, and hyperlinks can be shared with the contacts one at a time. The files for sharing can only be shared after uploading it through the Google drive which ensures full safety.

Google keep has an intuitive and attractive user interface. It is extremely easy to use, and the navigation is arranged very well with links to reminders, notes, labels, and settings on Google Drive. The mobile app for Google Keep too is quite simple and easy to use.

CintaNote is a smart alternative to Evernote. It has the function to capture the text from any applications, it attaches the files and images to the notes and also synchronizes them on the different devices.

It is considered as one of the best Evernote alternatives as this note can work and retrieve the notes both in online and offline mode. It encrypts the whole notebook with password protection and creates an automatic notebook backup.

Goodnotes is available on the IOS platform for Apple device users. It allows for easy scribbling of notes, and also allows the user to create multi-media images, word documents, PDF’s and powerpoint presentations all in a single file.

The app also indexes the notes for quick search. Even though the handwriting may be illegible, this app can index the notes and allow the user to search them when required instantly. It is one of the best handwriting apps in the market.

Notejoy is a great alternative to Evernote. It is a collaborative platform, unlike Evernote where note sharing with contacts can be done instantly and effortlessly. It is a real-time app which makes it easy to collaborate productively with instant sharing of notes. It also syncs fast to different devices.

It can be used on various platforms like Mac, Android, Windows, and IOS. Providing feedback and receiving them is very easy with Notejoy. It provides a lightning speed of search to find notes effortlessly and is a greatly popular app for workplaces where a team needs to work in constant collaboration.

Box Notes is a great alternative to Evernote. This online note app works with a cloud based storage system and user-friendly interface. It is a real-time collaboration tool which provides faster access to notes from the web and desktop. The BoxNote is easily available and accessible from anywhere on the mobile, desktop or the web.

BoxNote has integrated security features unlike many other note-taking apps. It keeps a detailed log to track the access to documents viewed and edited. Global standards of security secure every note on BoxNote.

Quip is a combination of spreadsheets, documents, and PowerPoint with its checklists and one of the greatest alternatives which have sprung in the market for Evernote. The quip docs can be viewed and simultaneously edited at the same time with real-time options in-built in it.

The leading companies like Facebook, Amazon, and Dell have shifted to Quip for faster real-time note editing and sharing.

It is the minimal typing app which also serves a great purpose as a note-taking app. It supports the markdown feature and enables the user to flick between pages quickly. It also lays out the text in a coherent manner with an enhanced search feature.

The fonts are well spaced out, and it is mostly used in conferences, lectures, and seminars. The text previews give a very good excerpt of the note.

It comes with enabled features like night mode, easy user interface, and a very light blue highlight to keep the app look distinct.

Zoho Notebook is a pretty looking alternative with a great UI to the Evernote. The Zoho notebook securely stores all notes to the cloud storage system and syncs with available devices smoothly. It is easily accessible by mobile devices.

Zoho allows the user to set alarms for every individual note which can also be allotted as reminders on the registered e-mail. The recovery of deleted notes is another great standout feature of Zoho.Zoho comes with great lock feature for enhanced security. It lets the user lock each individual note with password protection.